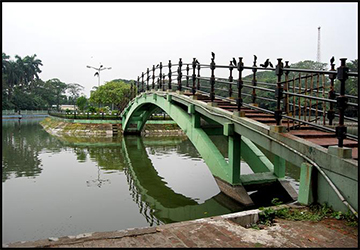 This is a story of a city that exists for more than 300 years. East India Company acquired three adjoining villages - Sutanuti, Gobindapur and Kalikata. A conglomerate, British soon started calling it Calcutta. Since then the city became the centre of power for next few centuries. From Calcutta to Kolkata the city population has grown up to 4,496,694 (Census 2011). A sea of change came under the able service of Kolkata Municipal Corporation.
Providing civic amenities in near about 205 sq. km. area is really a mammoth task for KMC. So to restore habitable environment as well as to improve the quality of life in Kolkata several agencies are working hard in association with Kolkata Municipal Corporation. In this process Kolkata Environmental Improvement Project was initiated in 2002.

The success and the experience attained by KEIP created a need for continuation of the project. So Kolkata Environmental Improvement Investment Program (KEIIP) was formed in 2014. ADB agreed to provide a multi tranche financing facility (MFF) loan through three tranches under the title, “ADB- Loan 3053 – IND, 3413 - IND and 3689 IND.
KEIIP just stepped in to the shoes of KEIP, to extend improvement of sewerage and drainage network along with substantial water supply in areas where need has been identified. The project also aims to address capacity augmentation and financial management improvement. KEIIP envisions that the outcome of the project would allow healthy living and better access to basic facilities for the urban population concerning water supply and sanitation facilities, especially in the peripheral areas of KMC. It is believed that KEIIP will be an essential tool for KMC to substantially develop the quality of service delivery and operational sustainability in water supply, sewerage and drainage.

To eradicate unplanned development of newly added areas like Behala, Jadavpur, Garden Reach KEIP was initiated. While after completion of KEIP on 30th June 2013 both KMC and ADB wished to continue this effort as KEIIP.